A team of students from the BioResource and Agricultural Engineering Department devoted their senior project to designing and building a drill that will be used to access water in remote and underdeveloped regions throughout the world.

The students spent more than 829 hours over three quarters designing and fabricating the water well drill, making improvements to an existing model that will enable it to be readily used in drought-stricken areas that lack the resources to implement existing water drilling methods.

Soon the drill will be manufactured by Aquafor, a humanitarian group founded by entrepreneur Matthew Talbert, who studied business administration at Cal Poly in 1977. Talbert provided the seven member student team with an existing prototype and the $25,000 needed for materials to build a new and improved model. 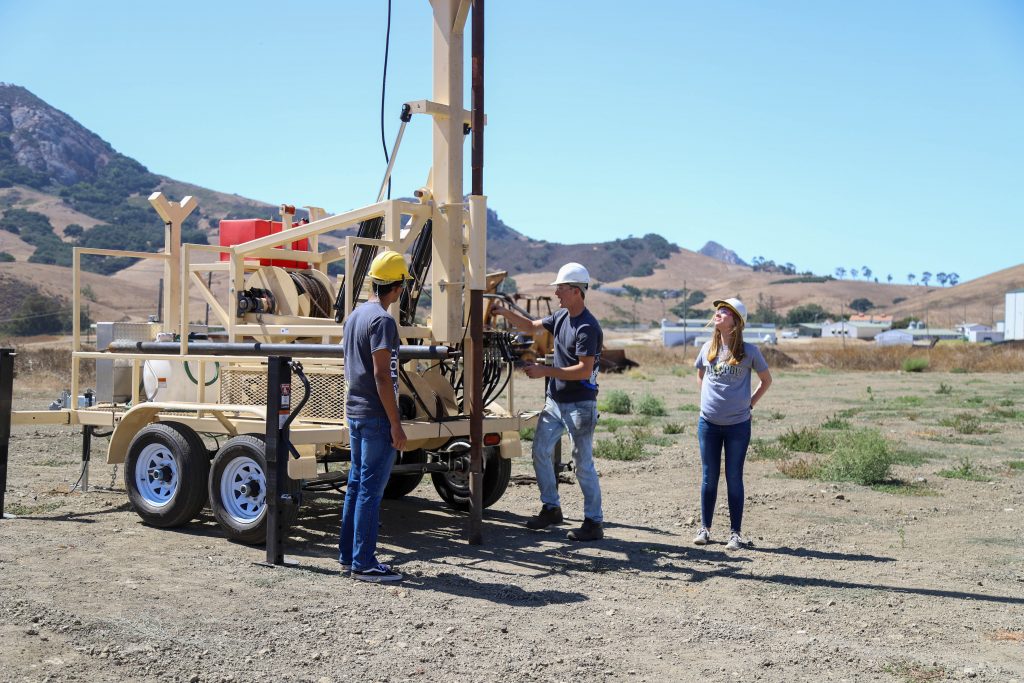 “All you have to do is go where people are impoverished and see the struggles of the people who are living there to know that something has to be done,” Talbert said. “People are walking miles and miles for filthy water and that is unacceptable. We have it so fortunate here, it is imperative that we give back.”

The Borelite Drill is a lightweight cable tool water well drill that uses a repetitive motion to smash and chip away at soil and rock. While existing drills use exorbitant amounts of water and fuel to drill quickly, the student-built drill relies on a 10 horsepower engine and only 10 gallons of water per day to drill.

“The drill will take longer to reach the needed depth to acquire water, but in the impoverished areas that these drills will be used, people have time, but they don’t have resources such as gas and water,” said Peter Livingston, head of the BioResource and Agricultural Engineering Department.

Students designed and built the drill, as well as provided the design drawings needed to replicate it. The weight and size of the final design allow for two fully constructed drills to be placed in a shipping container and sent overseas to countries in need.

“This is designed specifically to be able to function in some pretty harsh environments,” said Anthony Archuleta, Aquafor’s director of corporate responsibility.  “There is nothing proprietary about it; the parts are available in most countries. Our goal is to use our expertise acquired in other corporate ventures to get the drill into the places it is needed using the relationships we have forged and be able to save lives.”

Talbert acquired the original concept for the drill in the early 2000’s from a service organization in San Luis Obispo, which had worked with students in Cal Poly’s mechanical engineering department. However, years of delays prevented the concept from being fully realized. The time has finally come, said Talbert, who hopes to have the water drill produced and available next year. He envisions deploying areas in Central Asia, South America and Africa.

“The value of a project of this caliber is that it helps students realize the benefit of what they are doing for society,” Livingston said. “We teach about ethics and world influences and it is important that students are exposed to something other than a commercial entity trying to build something to make a profit.”